FROM TRAUMA TO TRIUMPH 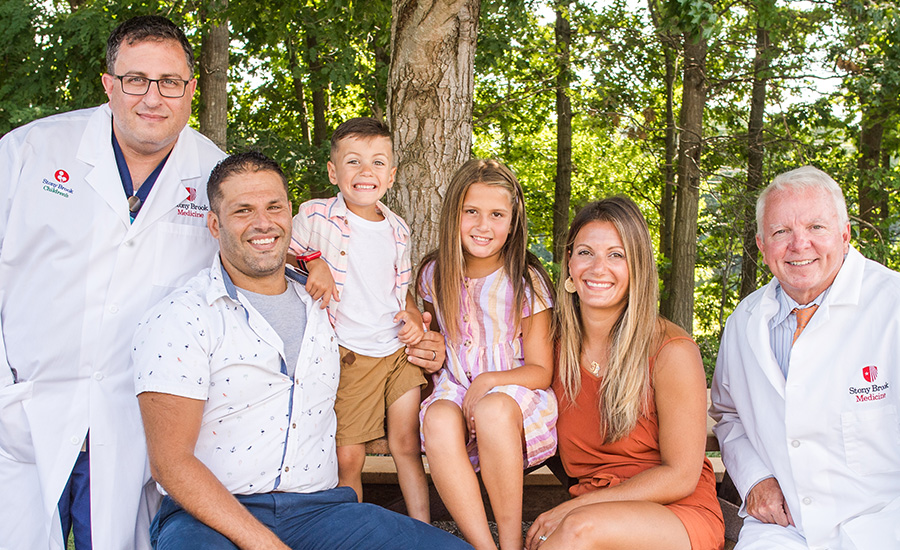 What began as a day off from school to celebrate human freedom in honor of Juneteenth, will now also represent, for the DeFraia family of East Moriches, a day to celebrate the humanity and skill of all the quick-thinking, fast-acting professionals involved in saving the life and future of their four-year-old son, Charlie.

On that quiet Monday afternoon in June, Charlie DeFraia, a preschooler at East Moriches Elementary School, sat sipping a yogurt snack through a metal straw on the front porch of his family’s home. His seven-year-old sister Madison sat on the porch swing just a few feet away. The following day would be their last day of school and they were both excited to officially begin summer.

Their mom, Crystal DeFraia, a high school math teacher at William Floyd High School, was in the backyard getting the family’s new inground pool ready for the season. Their dad, Dr. Charles DeFraia, an internist with Stony Brook Southampton Hospital, was inside catching up on sleep after an overnight fishing trip.

Amidst the calm, both parents suddenly heard Madison’s frantic screams and arrived at the front porch to find Charlie on the ground with blood covering his face. Madison explained that Charlie had lost his balance and fallen off the porch ledge. The family’s first thought was that Charlie had broken his nose or suffered a head injury. Charlie’s dad immediately went into doctor mode, while his mom called 9-1-1.

When Every Second Counts

Within two minutes, a Stony Brook Medicine EMS vehicle that was in the area, responded to the call, along with the Suffolk County police. When Stony Brook EMS paramedics Erin Lambert and Joseph Rosadio saw the amount of blood pouring out of Charlie’s mouth, they immediately called in a pediatric Code T — the highest-level trauma emergency code. Charlie was carefully placed in the ambulance, while his mom and dad followed in the family car. A neighbor stayed with his sister Madison at home until the children’s grandparents could arrive to be there for her.

On the way to Stony Brook, with blood still pouring from his mouth, Charlie stopped breathing and had to be resuscitated twice. When his parents saw that the police had shut down Sunrise Highway to help expedite Charlie’s arrival to the Stony Brook Trauma Center — the only Level 1 Adult and Pediatric Trauma Center in Suffolk County — they knew their son’s life was in jeopardy. 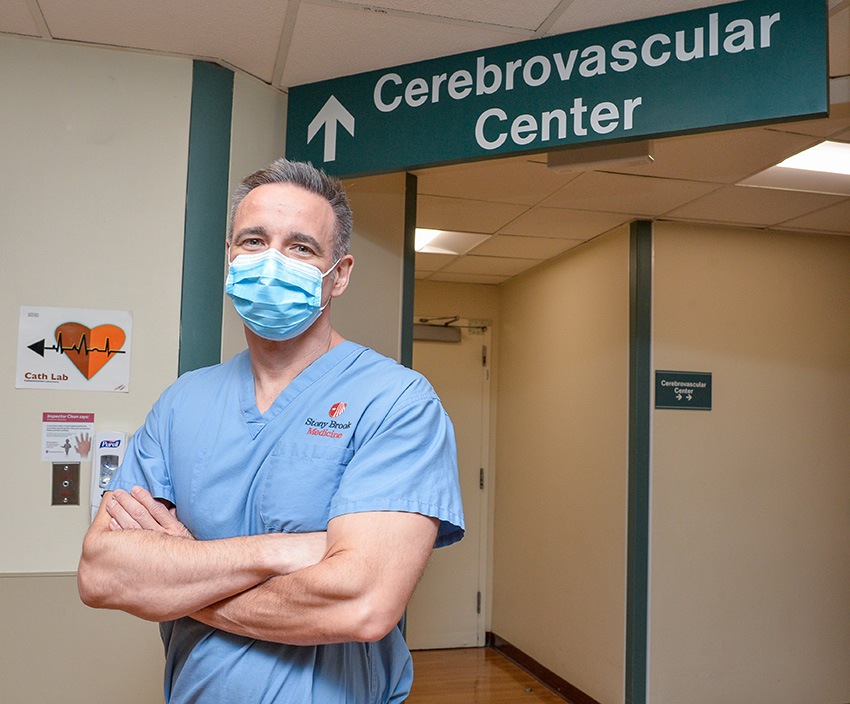 Meanwhile, the pediatric trauma team back at Stony Brook prepared for Charlie’s arrival, calling in every resource available in response to the emergency. Dr. Richard Scriven, Chief of Pediatric Trauma at Stony Brook Trauma Center, was on call that day. Though Charlie maintained a carotid pulse on his left side, by the time he arrived at the Trauma Center, he had none on his right side. “I was standing by the nursing station when Charlie arrived with the paramedics. He was very close to bleeding to death and within minutes of cardiac arrest,” said Dr. Scriven.

The Stony Brook Children’s Hospital Emergency Medicine team, under the supervision of pediatric attending physician Dr. Caitlin Feeks sprang into action, as Charlie’s parents stood nearby, still in shock. Within seconds, Dr. Hayley Scott successfully intubated Charlie, and the pediatric trauma nursing team of Sarah Williams, Patrice Babian, Stacey Rolston and AnnMarie Lupo began pumping blood into Charlie’s body. But as fast as the blood could be pumped in, it poured out again from Charlie’s mouth. Director of Pediatric Neurosurgery, Dr. David Chesler, Dr. Scriven and Chief Pediatric Surgery Resident, Dr. Ross Weller, all suspected it was a carotid artery injury. The carotid arteries are a pair of blood vessels located on both sides of the neck that deliver blood to the brain, head and face.

Dr. Weller asked Charlie’s parents if there was any chance that Charlie could have had a puncture wound. “In my 30-year career of practicing emergency medicine, only a carotid artery puncture could account for that kind of bleeding,” explained Dr. Scriven.

That’s when Crystal DeFraia had a flashback to the metal straw and yogurt she remembered seeing on their driveway as she left the family’s home to follow the ambulance. Armed with this important new information, Dr. Scriven and Dr. Chesler used gauze to pack off Charlie’s oropharynx to stem the acute bleeding. The oropharynx is the part of the throat at the back of the mouth that includes the back third of the tongue and the side and back walls of the throat. “We’ve seen dozens of kids with straw perforations in the back of the mouth, but never before had one penetrated into the carotid artery,” said Dr. Scriven. “This was a first.”

Time is Brain: Evaluating the Artery and Blood Flow 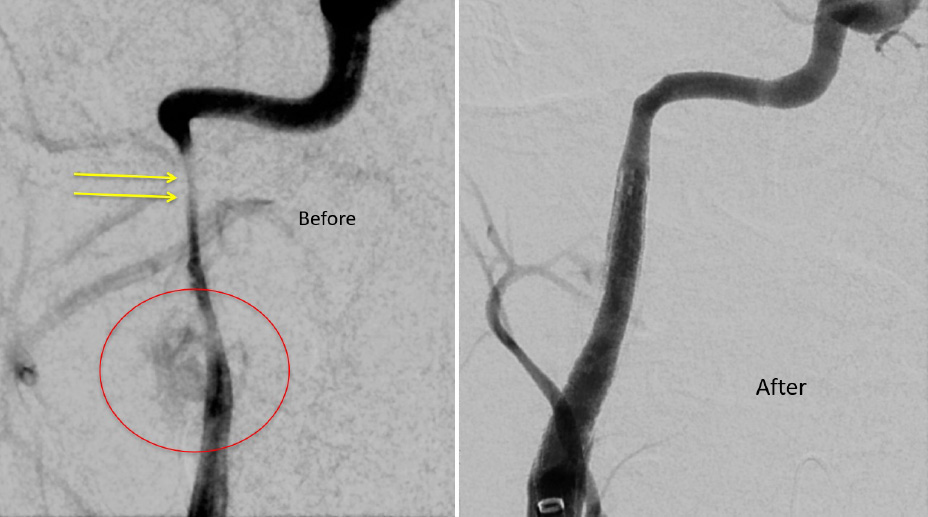 The nurses continued to pump blood into Charlie, and Dr. Chesler immediately ordered a computed tomography (CT) angiogram scan to evaluate the injured artery and check the blood flow to the brain. The scan confirmed that Charlie’s right carotid artery and jugular vein had been punctured and were actively bleeding into his neck soft tissues as well as through the tear in the back of his throat, directly into the packing material in his oropharynx. To make things even worse, a CT perfusion scan showed that the right side of Charlie’s brain had very little blood flow.

Too Risky for Surgery

“The injury was very high up near Charlie’s skull base, making it too risky to approach surgically,” explained Dr. Chesler, who then called in neurointerventionalist Dr. David Fiorella, Director of the Stony Brook Cerebrovascular Center.

Dr. Chesler then rushed Charlie into the angiosuite where Dr. Fiorella and his team were confronted with a difficult situation. They had a badly torn carotid artery that was actively leaking into the neck soft tissues and mouth, and the carotid artery was also pushing blood through an open tract into Charlie’s injured internal jugular vein — the largest vein in the neck. There was no option to just simply block off the artery, as it provided vital blood flow to the right side of Charlie’s brain. 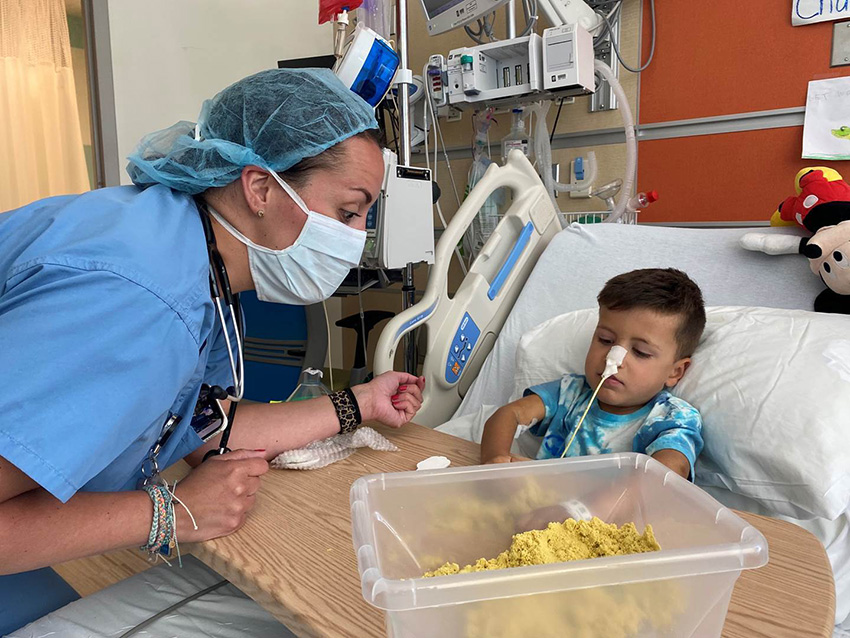 Charlie, post-op, playing with sand as a form of physical therapy to help him regain use of his left arm and hand, as nurse practitioner Krista O'Donnell watches with words of encouragement. (Click on image to view larger)

Fortunately, Dr. Fiorella and his team were able to work through a small channel past the torn part of the carotid artery and used several telescoping stents to start reconstructing the injured artery. These initial devices reopened a stable channel of blood flow to Charlie’s brain. Next, Dr. Fiorella was able to finish the carotid artery reconstruction and definitively stop the bleeding by telescoping one additional, self-expanding stent, which was covered with a non-porous membrane, to form a water-tight seal (or “graft”) over the hole in Charlie’s carotid artery. The procedure was successful and quickly restored blood flow to the brain and stopped the active bleeding. Even more amazingly, the procedure was all accomplished minimally invasively through a tiny puncture hole in Charlie’s right femoral (leg) artery.

Charlie was then stabilized and brought to the Pediatric Intensive Care Unit (PICU), where he remained sedated in a medically induced coma on a ventilator for a week, under the watchful care of Dr. Chesler, his team of pediatric nurse practitioners Nancy Strong and Krista O’Donnell, and the PICU team. “When it didn’t seem like Charlie would lose his life, we were then worried if he would have a positive future,” explained Crystal DeFraia. “Krista and Nancy were by Charlie’s side the entire time. I can’t speak highly enough about them.”

Charlie’s post-op MRI showed only a small amount of injured tissue on the right side of the brain. The entire rest of the brain was completely intact. “While Charlie will need to be on aspirin to keep his stent open, all of the area at risk for stroke from his original CT angiogram and perfusion studies was successfully salvaged when Dr. Fiorella rebuilt Charlie’s carotid artery,” said Dr. Chesler.

Charlie with his dad and mom getting some fresh air on Stony Brook University Hospital's helipad, a few days before Charlie's discharge.
(Click on image to view larger)

“We feel so blessed. Dr. Fiorella is a god to us!” said Crystal DeFraia.

“Stony Brook is one of a select few hospitals in the country equipped with the resources to give patients with these types of complex cerebrovascular problems, an opportunity for a full recovery,” said Dr. Fiorella. “We are so proud of our multi-disciplinary team’s unique expertise and experience that allow patients like young Charlie get back to his life again.”

Ready for Summer Fun and Kindergarten

The next milestone in Charlie’s recovery came on July 7, when he was discharged from Stony Brook Children’s for rehab/therapy. Within days, Charlie was back home again, eager to play and go swimming with Madison in the family’s new inground pool.

The scar covering the tiny puncture site on Charlie’s leg where Dr. Fiorella had performed his minimally invasive magic is barely visible as a small dot on Charlie’s right thigh. 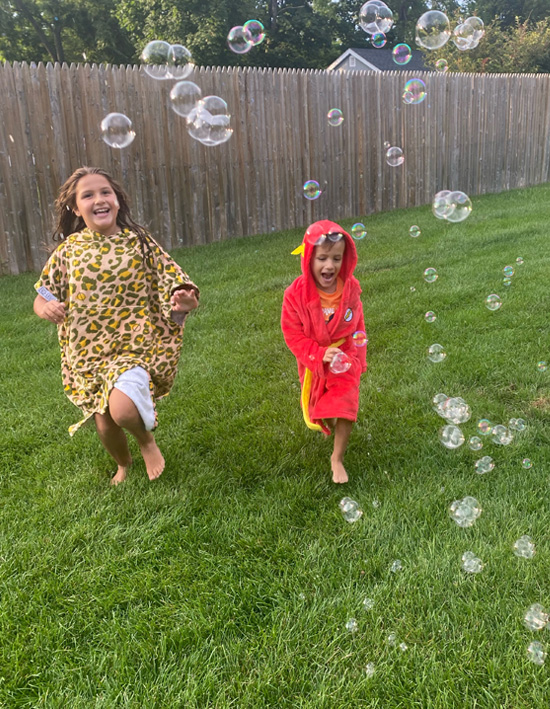 “He’s an absolute miracle. It was nothing short of amazing from the time the ambulance came to our home, to Charlie being at Stony Brook University Hospital — through the entire time to his discharge — we’re forever indebted,” said Crystal DeFraia. “Stony Brook not only saved Charlie’s life. They saved his future.”

As for his immediate future, Charlie is right on track. He entered kindergarten as planned on September 7. And on September 14, he turned five. As you might imagine, among the presents, birthday cake, Charlie’s favorite Sour Patch Kids® candy, party activities and yogurt snacks... there were no metal straws. And there won’t be. Ever again.

While Charlie's case has a happy ending, his trauma to triumph experience serves as a cautionary tale to families everywhere about the dangers of using metal straws. Several national media outlets reported on Charlie's experience and it made international news as well. Read more about how Charlie's life was saved by visiting: USA Today, Today.com, People.com and Insider.com.