When a nine-year old Jr. Black Belt's opponent is a ruptured AVM, the best dojo is Stony Brook Children's Hospital 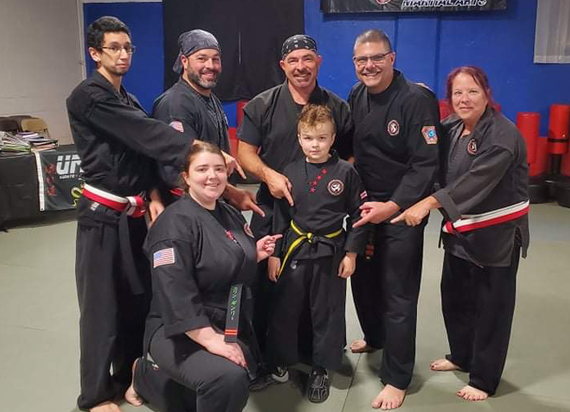 Nine-year old Logan Baar ended 2020 with a bang – or kiai, earning his long-coveted junior black belt in karate. Little did he know that a week later, he would soon put the character-building values he’d learned from karate to the ultimate test in his everyday life.

It was Saturday, just two days into the 2021 new year. Logan was stuck at home with the rest of his family who were all COVID-positive — making the most of his quarantine, fully consumed by a game on his iPad®. Suddenly, his mom, Tiffany Baar, heard a blood-curdling scream come from Logan’s room. She and her 11-year old daughter, Gemma, raced over to find Logan — a usually happy, healthy and high-spirited kid — laying there with the right side of his face paralyzed. As Logan went in and out of consciousness, his aunt Madison, a paramedic, called 9-1-1.

Within minutes, Logan was rushed to Stony Brook Children’s Hospital Emergency Department (ED), where he arrived in a comatose state.

From decompressive craniectomy to diagnosis of ruptured AVM

At the time of Logan’s arrival, pediatric neurosurgeon Michael Egnor, MD, was on call. An emergency brain scan showed that Logan had experienced a large, life-threatening bleed within the left side of his brain. Dr. Egnor immediately took Logan into the operating room (OR) to perform a lifesaving procedure known as a decompressive craniectomy. During this procedure, Dr. Egnor removed of a portion of Logan’s skull to relieve the pressure on his brain.

A second scan showed that the cause of Logan’s bleeding was a brain arteriovenous malformation (or brain AVM). An AVM is a congenital (present from birth) malformation – an abnormal cluster of irregular blood vessels.  An AVM puts extreme pressure on the walls of the affected arteries and veins that communicate with each other, causing them to become thin or weak. Where this occurs is known as the AVM nidus. When pressure builds up in the AVM nidus, it can rupture, causing a catastrophic brain bleed. While AVMs are fairly rare in the overall population, they are one of the most common causes of non-traumatic (not caused by an external physical force to the head) brain bleeds in children. 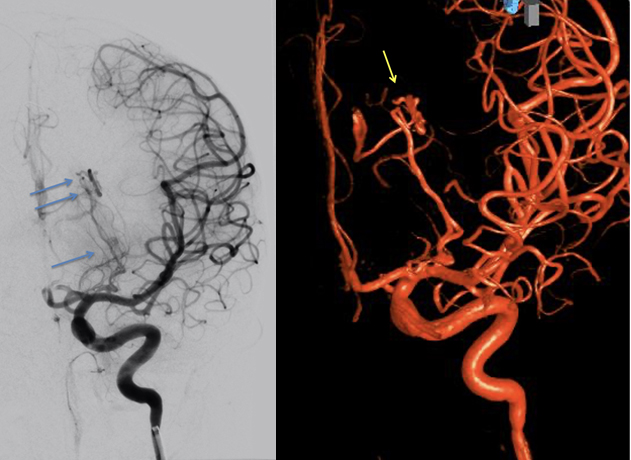 Left image: Arrows show the small AVM that was the cause of the bleed
Right image: Yellow arrow points to the AVM nidus on the 3D angiogram
(Click on image to view larger)

Fortunately for Logan, he was brought directly to Stony Brook Children’s Hospital, home to Suffolk County’s only two pediatric neurosurgeons, Michael Egnor, MD, and David Chesler, MD, PhD, who are accustomed to treating this relatively rare condition in children.

After Dr. Egnor’s successful decompression craniectomy on Logan, which took about two hours, David Fiorella, MD, PhD, Director of the Stony Brook Cerebrovascular Center, was brought in to assess the situation.

Embolizing an inoperable AVM on the first round

It was determined that the ruptured AVM was located too deep within the left frontal lobe — a vitally important area of Logan’s brain — to remove surgically. While it is responsible for movement and sensation on the dominant right side of the body, the left frontal lobe is also the brain’s speech center. Any additional injury to this side of the brain would leave Logan completely paralyzed on the right side and unable to talk or understand speech for the rest of his life.

Fortunately, for Logan, Dr. Fiorella was able to perform a minimally invasive surgery, called an embolization, to cure the AVM. During the embolization procedure, Dr. Fiorella carefully guided small catheters (flexible tubes) inserted through Logan’s femoral (leg) artery all the way up into his brain and into the tiny, fragile arteries supplying the AVM nidus. He injected a material known as Onyx® through the catheter into the AVM. This material is injected as a liquid into the nidus, where it hardens into a solid, blocking off the abnormal cluster of arteries that caused the bleeding.

In most cases, this Onyx embolization procedure is performed to make open surgical removal of a brain AVM safer and easier. However, in this case, since surgical removal of the AVM was not possible, Dr. Fiorella needed to inject enough of the Onyx material to cure the AVM completely. He needed to accomplish this without causing additional bleeding, while navigating his tiny catheters within these fragile brain arteries. Otherwise, there would be a risk of the material flowing into a blood vessel, feeding a normal part of Logan’s brain, which could cause a devastating stroke. Dr. Fiorella, one of the most experienced interventionalists in the country, was able to perform this embolization procedure seamlessly. He cured Logan’s AVM completely — not with open brain surgery, but through a tiny puncture site in the femoral artery. 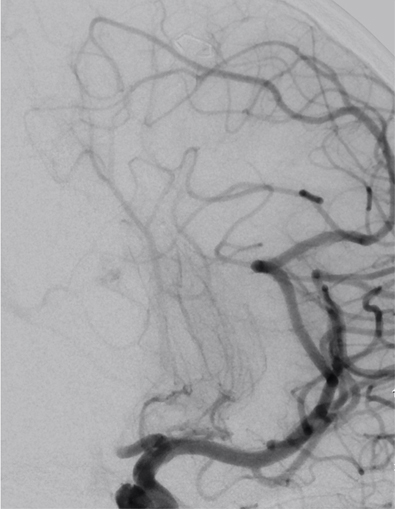 “Our field of neurointerventional surgery is advancing so quickly that we are now able to perform procedures which were unimaginable even just a few years ago. At Stony Brook Medicine, we are so fortunate to have access to all of the newest and most effective technologies, often times before anyone else in the country. This allows us to perform these incredible minimally invasive procedures on a daily basis,” explained Dr. Fiorella.

Once the embolization procedure was completed, Stony Brook’s other pediatric neurosurgeon, Dr. Chesler, along with neurosurgery nurse practitioner, Nancy Strong, NP, took over the management of Logan’s care in Stony Brook Children’s Pediatric Intensive Care Unit (PICU), where Logan remained in critical condition for the next 48 hours.

Upon stabilizing Logan’s vitals in the PICU, Dr. Chesler established that Logan could breathe on his own. When Logan woke up, he was still heavily medicated. And because the ruptured AVM occurred on the left side of his brain, he still had severe right-sided weakness and difficulty speaking. He couldn’t understand why his body wasn’t working.

Lots of PT, OT, and TLC helped, too

As he emerged from his sedation, Logan was glad to see his mom, who was allowed to stay in the hospital room with him throughout his time at Stony Brook Children’s Hospital. His dad, Marius Baar, and sister Gemma held down the fort at home. During his three weeks in the PICU, Logan participated in intensive physical therapy (PT) and occupational therapy (OT) and he became stronger and stronger every day. He steadily regained his ability to walk. He wore a craniectomy helmet to protect his brain, used a device to help him communicate and a cane to help steady his balance. Nurse practitioner Strong and the team of nurses made sure Logan received lots of TLC, too, adding silliness, fun, humor and other special touches to Logan’s long days and nights. Then, a month after his lifesaving decompressive craniotomy, Dr. Chesler performed the procedure to put Logan’s skull bone back in place. 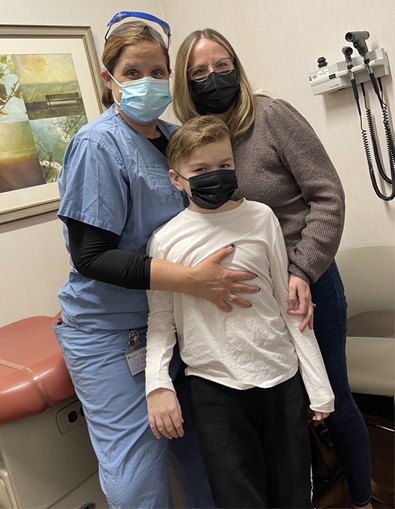 Logan and his mom have nothing but high praise for how well Logan was cared for. “Everyone — Dr. Egnor, Dr. Chelser, Dr. Fiorella, Nancy Strong, all the nurses, the housekeeping staff — they all were absolutely phenomenal!” said Logan’s mom.

“I could just cry talking about how wonderful all the people were at Stony Brook…the way they came together as a team,” she added. “Signing all those papers when I first arrived, I felt like I was giving my child away. He was whisked into surgery within an hour of arriving at the ED. And then a month later, by the time we were ready to go home, it was sad to leave. You trust these people so much. They become like family.” 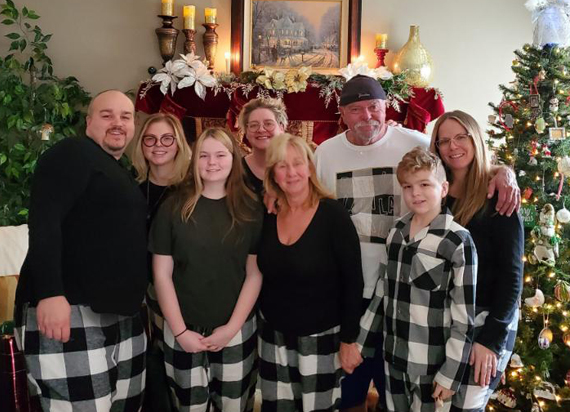 Nearly a year after Logan’s life-threatening AVM, there was a lot to celebrate in the Baar home on Christmas morning, 2021
(Click on image to view larger)

In true Black Belt character, Logan continued to move forward with tremendous strength throughout his recovery. Once a right-handed boy, Logan now writes with his left hand. And though it took a while, his speech gradually came back. According to his mom, so did his sarcasm. He’s bounced back in other ways, too. After missing only five months of school last year, he was back in the classroom by June. He’s also back doing karate and swimming and playing video games with his friends. In the fall, he adjusted well to the transition to middle school. Math is still his favorite subject, and he even made the honor roll!

“Logan’s recovery is nothing short of a miracle and it would have been difficult to even imagine it when he arrived that day with his brain bleed,” stated Dr. Chesler. “His tremendous perseverance remains an inspiration to everyone in his life, including his Stony Brook Children’s Hospital family.” 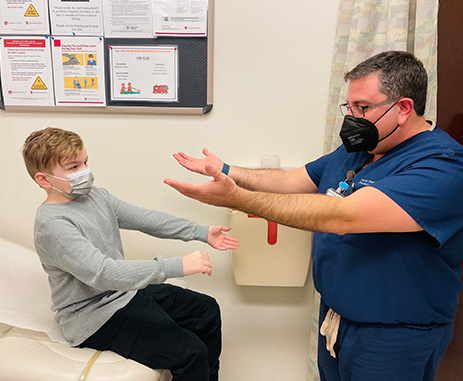 Logan Baar at his one-year follow up visit with Dr. Chesler
(Click on image to view larger) 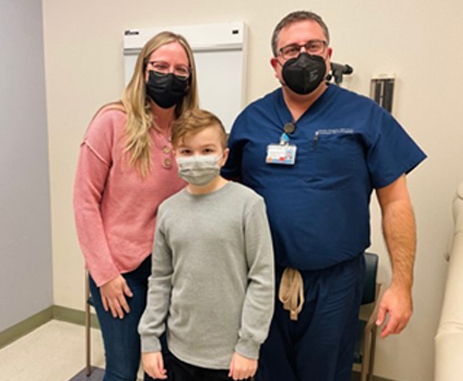 Tiffany and Logan Baar with Dr. Chesler
(Click on image to view larger)