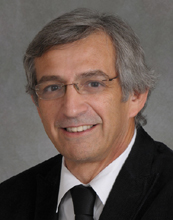 I believe that the role of biomedical engineers is to help nature help itself. My research interests revolve around hemodynamics. This includes not only the exploration of what is, but also create what does not exist. Our laboratory is involved in the study of blood flow to the brain and the creation of therapeutic devices both retractable and implantable to restore blood flow to normal physiological conditions. Some example include the analysis of blood flow from radiographic images, the application of mathematical tools to simulate blood flow in vasculature of interest, creation of silicone replicas of blood vessels both with and without pathologies for both elucidation of flow within and for the testing of new tools for blood flow restoration and navigation of access tools. Coils for the treatment of brain aneurysms and flow diverters are examples of mechanical devices that have been investigated extensively in our laboratory. Histoacryl, the predecessor of NBCA and Onyx for the treatment of arteriovenous malformation have all been investigated extensively in our lab.

The goal of my laboratory's research is to develop new treatment modalities for cerebrovascular maladies that include the local delivery of mechanical devices, pharmaceuticals and energy directly to the target pathology during minimally invasive interventional procedures.

American Institute of Aeronautics and Astronautics - most dedicated and active faculty advisor honor (1992, 1994)

Fellow - College of Fellows of the American Institute for Medical and Biological Engineering, 1999.

2005 Johnson A. Edosomwan Researcher of the Year, University of Miami, College of Engineering