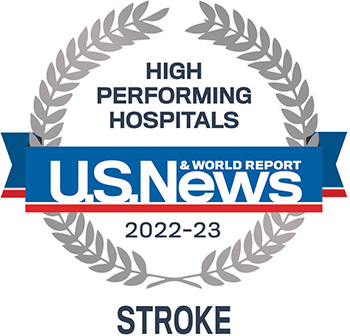 Our services and treatments include:

Diagnostic Cerebral Angiography: We perform over 1000 angiographic procedures every year at Stony Brook Medicine. Our high experience level allows us to perform these procedures safely and efficiently. We currently perform nearly all of our diagnostic angiography procedures using a transradial approach (through the wrist artery). This is a safer and easier approach than traditional transfemoral approach which is still used at many insitutions providing this procedure. Our transradial approach has been supported by extensive data which have demonstrated that transradial angiography results in lower risks of access site bleeding shorter length of hospital stays, shorter periods of bed rest and greater patient comfort and satisfaction.

Brain Aneurysms (Cerebral Aneurysms): A brain aneurysm occurs when the wall of an artery supplying blood flow to the brain bulges out to form a balloon-like structure. Arteries carry high-pressure blood flow from the heart to the organs of the body. The constant pressure within an artery can cause brain aneurysms to grow over time and eventually leak (or rupture). When a brain aneurysm leaks, this causes arterial force bleeding to occur and enter into the fluid space around the outside of the brain. This type of life-threatening bleeding is called a subarachnoid hemorrhage – which is a common type of hemorrhagic stroke. 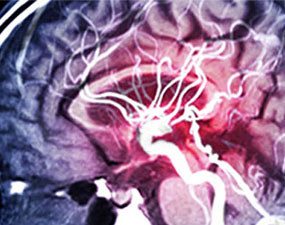 We are currently participating in multiple ongoing clinical research trials for brain aneurysm treatment that allow us to offer our patients the newest and most advanced brain aneurysm therapies.

Stroke: There are two general categories of stroke – ischemic and hemorrhagic. Stony Brook Medicine has experts in the treatment and diagnosis of both kinds of stroke.

Transient Ischemic Attack (TIA): Often referred to as a “mini stroke,” TIA is a brief episode (sometimes lasting just a few minutes) during which a region of the brain does not receive enough blood flow to function normally. Because the blood supply is restored quickly, the affected brain tissue does not die as it does in a stroke. The most common TIA symptoms include (but are not limited to) difficulty speaking or understanding speech, loss of feeling on one side of the body or face, or weakness on one side of the body or face. These attacks are often early warning signs of an impending major stroke. If you have experienced any of these symptoms it is important to seek medical attention and undergo appropriate evaluation and testing.

Carotid Stenosis: “Carotid stenosis” is caused by the build-up of fatty plaque (atherosclerosis) within the walls of the carotid arteries that causes them to become severely narrowed (i.e., “stenotic”) The carotid arteries are the major arteries that carry blood flow to the front portion of the brain (i.e., the “anterior circulation”). Carotid stenosis can cause a TIA and/or an ischemic stroke if the narrowing becomes severe enough to limit blood flow to the brian or if pieces of the atherosclerotic plaque break off and float up into the brain and block off brain blood vessels. Carotid stenosis may be present for a long time before symptoms of TIA or ischemic stroke first appear. People with severe atherosclerotic disease affecting other areas, for example the coronary arteries, screening for carotid disease may be needed. Carotid stenosis can be diagnosed by a carotid ultrasound – a simple test that does not require a dye injection or radiation. Stony Brook Medicine has experts in the diagnosis and treatment of carotid stenosis (link). Available treatments for carotis stenosis include:

We have  several ongoing clinical trials, which provide our patients access to some of the newest, best and safest technologies for treatment of carotid stenosis.

Intracranial Atherosclerotic Disease (ICAD) or Intracranial Stenosis: ICAD refers to narrowing of an artery inside of the brain caused by atherosclerosis (also known as “hardening of the arteries”). This can also lead to TIA or ischemic stroke. While ICAD is most often treated with aggressive medical therapy (blood thinners, blood pressure medications and cholesterol medications), it does sometimes required treatment with intracranial angioplasty and stenting. Stony Brook Medicine has particular expertise in the medical and interventional management of ICAD, as Dr. Fiorella was a National Co-Principal Investigator for the pivotal Stenting and Aggressive Medical Management for Preventing Recurrent Stroke in Intracranial Stenosis (SAMMPRIS), which defined the standard of care for the treatment of this disease.

Emergent Large Vesssel Occlusion (ELVO): ELVO is an acute occlusion of a major artery supplying the brain causing the immediate onset of stroke symptoms. The occlusion must be removed immediately to restore blood flow to the brian to prevent ongoing, irreversible brain damage. When a brain artery is occluded, minutes matter, and the saying is “Time is Brain.” These patients are taken immediately to the angiography suite for a procedure known as a “mechanical thrombectomy,” where the arterial blockage is cleared and blood flow to the brain is restored. If blood flow is restored early after symptoms first appear, patients can often make a fast and immediate recovery from these stroke symptoms. We perform over 150 thrombectomy procedures per year at Stony Brook and the number continues to increase every year. We are also participating in multiple ongoing thrombectomy clinical trials.

Mobile Stroke Unit Program: In 2019, David Fiorella, MD, PhD, led efforts to bring to Stony Brook Medicine, what is still Long Island's only program of its kind. Serving over 40 different communities, and working in collaboration with over 40 emergency medical service (EMS) agencies throughout Suffolk County, the mobile stroke unit team provides specialized, life-saving care to people within the critical moments of stroke, before they even get to the hospital. This markedly accelerates the time required to make  an accurate stroke diagnosis, allows for time-sensitive stroke therapies to be administered early, and allows for the transport of stroke patients directly to the most appropriate hospital for the level of care they require, the first time.

Chronic Subdural Hematoma (cSDH): Chronic subdural hematoma refers to a fluid collection which accumulates over the surface of the brain. These collections put pressure on the brain and can cause many different symptoms which can include headache and head pressure, confusion, cognitive decline, seizures, weakness, numbness and difficulty with speech. In the past the treatment of these collections required open surgery.

Cushing’s Disease: Refers to an endocrine disorder where too much cortisol is produced by the body. It is sometimes difficult for physicians to determine what organ is responsible for the elevated cortisol levels.

CONSULTATION
Our multidisciplinary expert team offers both in person and telemedicine consultations for the treatment of all cerebrovascular disease processes. Contact us for a consultation: